Bed Runner–turned out as table runner :)

For a very long time, I thought that Sewing World was a magazine published in America. Even when Tilly from Tilly and The  Buttons said she made a skirt pattern for them I thought the same thing. However, since she mentioned it on her fabulous blog I started thinking…. And in a very funny way, it’s dangerous when I do think … So I was told ……

Anyhow after much deliberation, I decided I want the May issue of Sewing World. Yes, that’s the issue with Tilly’s pretty skirt.  But when I ordered it on eBay, they sent me the July issue. I was so disappointed. At first, I thought I made a mistake. But no I did not do so. I ordered the correct issue.  It was the seller who had printing problems and sent me the wrong one.  A few emails later they told me they will send me the one I wanted and let me keep the one they already sent me. I was so happy. Because after seeing the July issue I knew I was in love with it. And more it is published here in the UK. Horray…… Did not take me long to get a subscription ….

But this is not the purpose of this post. I just wanted to share with you the table runner I made using the instructions in the May issue for a bed runner. 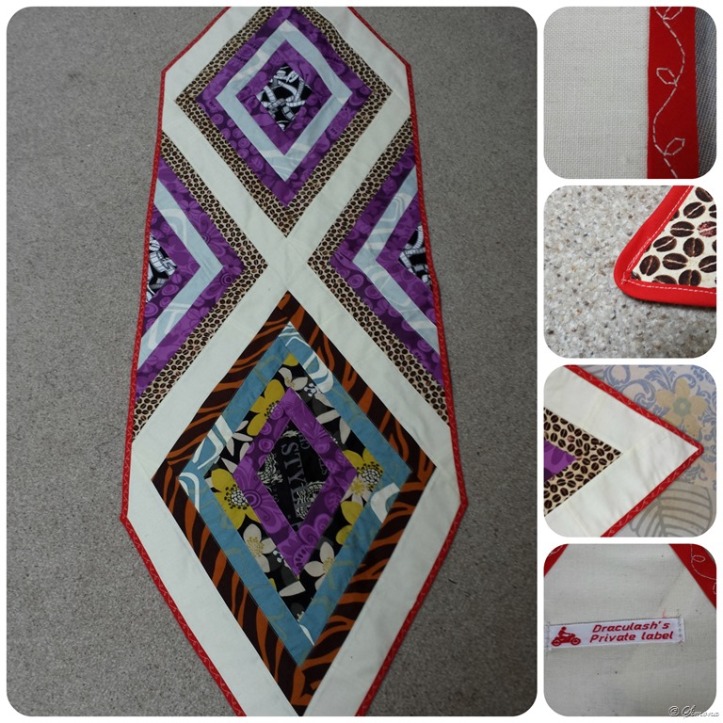 You know that bed must be been huge.  I started with a tiny diamond shape that grew and grew. I did not realise it will be so big because I  was working on all the blocks at the same time. All five of them.

I made it out of scrap fabric. some of the pieces I pieced them together from smaller pieces,

based on the original pattern, the block at the bottom of the picture should have been in the middle. But because of some mistakes, I made the last block did not line up with the other. Anyhow that worked best for me as the runner is exactly the size of my table.

With this runner, I finally took advantage of my machine’s embroidery stitches as well. finally. I did it more to save me some heartache in doing a stitch in the ditch and making sure I catch both sides of the bias binding. Yeah I know I was only cheating.

Well because two of the blocks had to be cut into two. I was only able to save one block, to be reused as a small table cloth 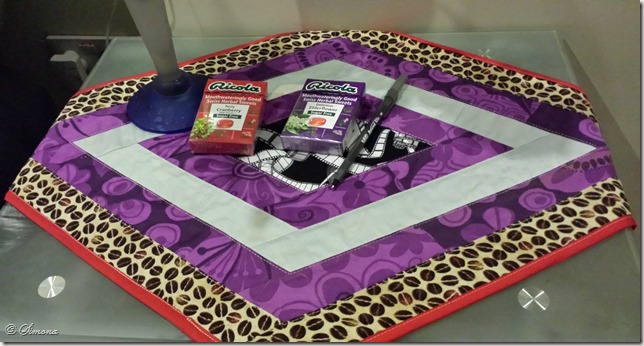 By making this project I learnt that I do like quilting as long as I am not using wading as well. It’s been fun. So I will continue using my scraps on small quilting projects. For the minute I will leave the wadding out, just to get a bit more experience.