As the title suggests, I’ve made the pockets once I finished overlocking some of the pieces.

Before I give you my thoughts on the

Welt insertion, I want to let you  know someone got carried away like always.

I’ve made a big mistake

. Remember I told you  I’ve made a muslin with the lining to check the fit because it seems a bit too big? So I’ve modified most my pieces from that and now I’ve discovered that the skirt  will be on the very tight fit side

. the thing is I would have still needed to make it smaller but not by as much as I did. I am hoping that by making very small allowances  (will try  the .50 mm or approx. 1/4 inch( the skirt will still fit. But to make sure I’ve got some stretch (fabric was cut on bias) I’ve also lost the interfacing on the top part of the skirt. Hope this will not mean another mistake

First I’ve read the instructions in the book, but i could not get my head around it. Then I’ve done a little search  on the internet. Most of the tutorials out there only seem to  cover single piece welt insertions, which was no good for me, as I already had the Welt separate. Managed to find one tutorial that helped  understand how to insert mine which I found on http://www.burdastyle.com/techniques/single-welt-pockets/technique_steps/5

I’ve started by taking the opening of the pocket opening. I’ve also added a line in the middle where the middle cut will be.Then I’ve pined and tacked the already constructed welt, with the raw edges on the cutting line. After that I’ve pined the pocket piece in main fabric stitched on the pocket opening line. After that I only needed to cut the pocket out and turn everything inside after ironing it. Looks a bit messy and I think it could look better. will need to so more practice on other projects, as I do like the look. 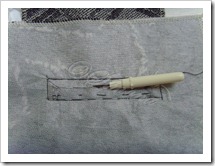 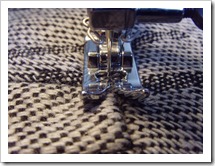 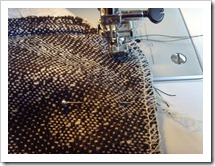 And Voila!! I’ve got a single Welt pocket. Yey! 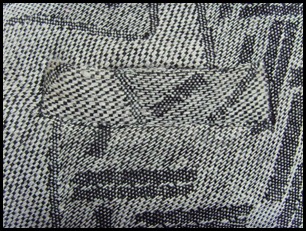 I’m thinking when I get a bit better a this, i might even make a tutorial on how to insert one welt pockets